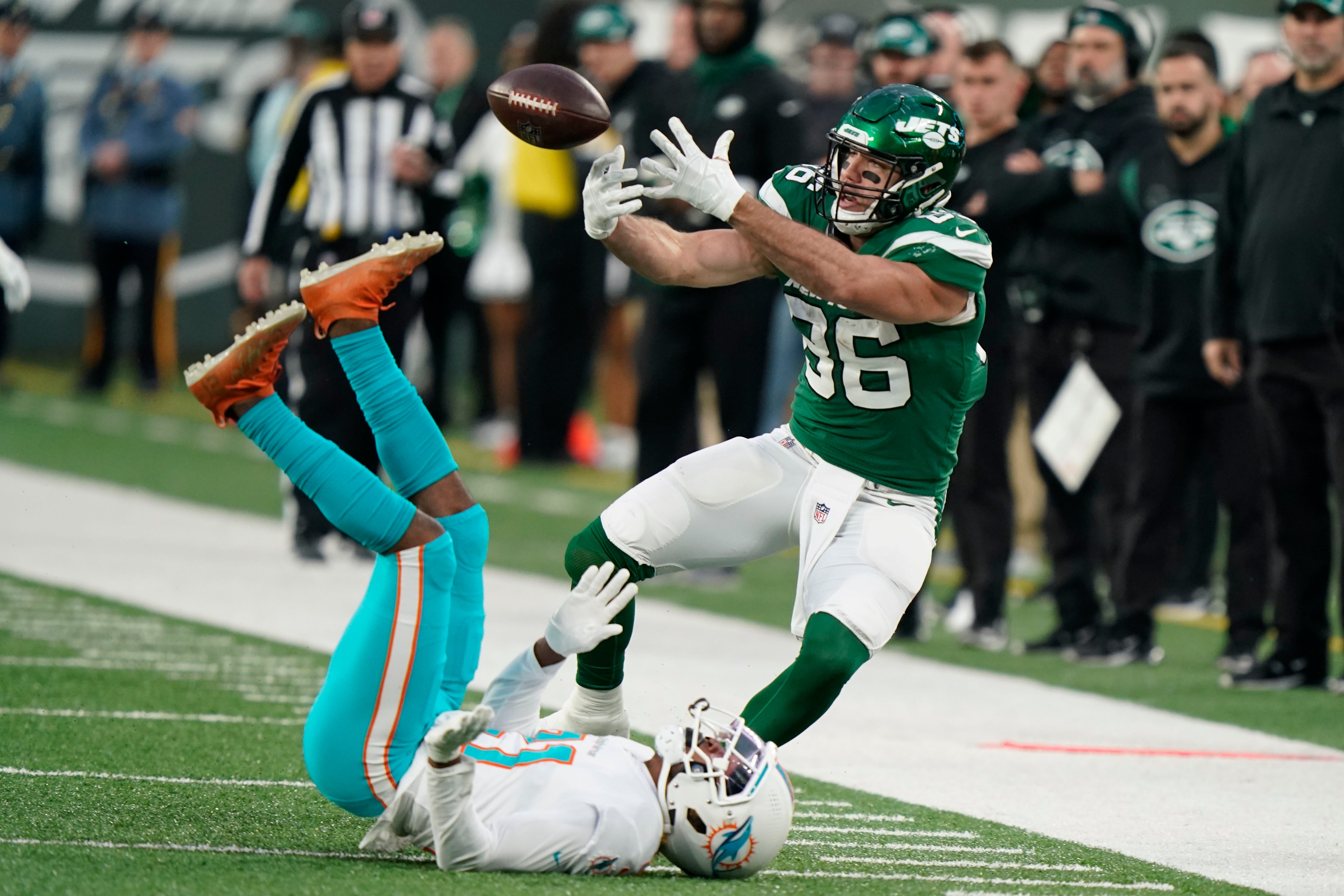 EAST RUTHERFORD, N.J. - Robert Saleh was clearly annoyed after the New York Jets' latest defeat, and it's hard to blame him.
His team had several chances to pull out a win against an AFC East rival. But mistakes, penalties and missed opportunities were too much to overcome in a 24-17 loss to the Miami Dolphins on Sunday.
“Ninety percent of the games in this league are lost, not won,” Saleh said. “And this one was lost.”
The 2-8 Jets, who rebounded defensively after allowing at least 45 points in three of their past four games, couldn’t make key stops late. And they also couldn’t get much going consistently on offense.
Joe Flacco made his first start in place of the injured Zach Wilson, who missed his fourth straight game. New York opted to go with the 36-year-old Flacco over Mike White, saying the veteran would give them a better chance against Miami’s aggressive defense.
Flacco wasn't bad at all, finishing 24 of 39 for 291 yards and touchdowns to Elijah Moore and Jamison Crowder. But it wasn't enough.
“We did some good things,” Flacco said. “But we made too many mistakes to win the football game.”
Two penalties on defense were the glaring miscues, and they both came in the fourth quarter.
With the game tied at 14 and the Dolphins facing a third down from the Jets 6, Tua Tagovailoa's short pass to Myles Gaskin fell incomplete. But instead of fourth down and a likely field-goal try, a roughing the passer penalty on John Franklin-Myers kept the drive alive.
Miami took advantage and Tagovailoa's 5-yard TD toss to Gaskin put the Dolphins ahead 21-14 with 10:15 left.
A penalty hurt the Jets again on Miami’s next possession, when Tagovailoa was sacked on third down - but it was wiped out by a holding call on Jason Pinnock. The Dolphins milked the clock and took a 24-14 lead with 1:57 remaining on Jason Sanders’ 24-yard field goal.
"The Pinnock one, he’s being aggressive with a big tight end," Saleh said. “I’ll never fault aggressive penalties. JFM ... unacceptable.”
On special teams, Matt Ammendola - who missed two field goals - lined up to attempt a 56-yarder on the Jets’ first possession after halftime, but Saleh said he changed his mind. New York was called for delay of game and then punted.
“I just didn’t want to take a chance at it,” Saleh said.
But Miami turned that into more points moments later when Tagovailoa connected with Mack Hollins for a 65-yard touchdown to give the Dolphins a 14-7 lead.
The Jets also had two substitution errors in the third quarter, causing them to burn timeouts early and leaving them with just one the rest of the way.
“That’s coaching,” Saleh said. “That's something we have to get fixed.”
Still, the Jets were in it nearly until the end - which might be considered progress by some.
“I tell you guys all the time: Whether you lose by one or 50, it doesn’t matter,” Saleh said. “This one, we lost.”
The bright spot was the fact the defense had a much better performance than it had the past month, when the Jets had given up 175 total points during their past four games.
So 24 points to the Dolphins didn't seem too bad, right?
“We didn’t get the outcome that we wanted,” Franklin-Myers said. “We played better as a defense. As a D-line, we have to do better and we expect to do better, and it starts with me. That penalty arguably cost us the game. Something that can’t happen on my end.”
There were other things, too, though.
Flacco lost the ball with the Jets at the Dolphins 5 when he was sacked by Brandon Jones in the second quarter. He also had an intentional grounding penalty in the third quarter that moved the Jets from the Dolphins 12 to the 22 - a possession that was capped by a missed 40-yarder by Ammendola.
New York finished with seven accepted penalties. And the Jets were just 1 for 4 on trips in the red zone.
“We’re in field-goal range three times - once, we decide to punt because of the distance, and two times, we missed field goals,” Saleh said. "I don’t care how good your football team is. I don’t care if you’re 10-0 or 0-10, it doesn’t matter.
“If you’re losing points in that regard, if you’re just handing points back and you’re not scoring when you have a chance, you’re not going to win.”
(Copyright 2021 The Associated Press. All rights reserved. This material may not be published, broadcast, rewritten or redistributed without permission.)
Related Stories
9h ago