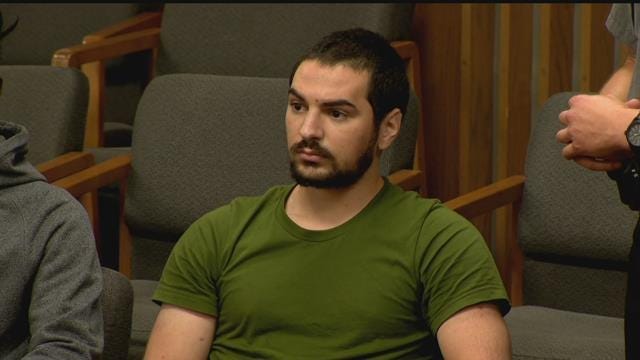 A Norwalk man who police and the FBI say showed interest in mass shootings was arraigned Friday.
Brandon Wagshol, 22, was arrested at his Bedford Avenue home in Norwalk Wednesday and charged with four counts of illegal possession of large capacity magazines.
Wagshol's bond was kept at $250,000, and the judge ruled he can only post it at the courthouse after a hearing so conditions can be put on his release. That hearing is set for Sept. 6 in Stamford.
Wagshol's attorney, Darnell Crosland, said his client has no intention of committing a mass shooting.
Police recovered a .40-caliber handgun from inside the home, a .22-caliber rifle, several rifle modifications and scopes with a laser and a cache of ammo. During the joint investigation, the FBI and Norwalk police say Wagshol was buying rifle parts online.
MORE: Police use Red Flag Law to seize weapons of man who 'showed interest' in mass shootings
MORE: Norwalk police, FBI arrest man who 'showed interest' in a mass shooting
Police say Wagshol made an alarming Facebook post where he showed interest in committing a mass shooting.
"What I understand is that he didn't make any comments on Facebook, but there may have been other memes, as they call them, that he might have reposted," says Crosland.
FBI investigators say the Norwalk Police Department received a tip about Wagshol's activity from a concerned citizen. The joint investigation began after the FBI received a tip that Wagshol was trying to buy high capacity magazines from out of state.
Police say all the weapons recovered from the home are legally owned and registered to Wagshol's father, but that the 22-year-old had access to them. Investigators also recovered body armor with a titanium plate, camouflage shirt, pant and belt, ballistic helmet, tactical gloves, camouflage bag and computers.

Wagshol's witness statement gives his explanation for the ammunition and rifle parts. In it, he also says he did not plan on a mass shooting.

"I drove to Halstead New Hampshire from Norwalk CT in about 3 hours to acquire 30 round magazines and ammunition to circumvent what I viewed as an unconstitutional restriction on the second amendment. I purchased 4 30 round magazines and 120 rounds of 300 Blackout ammunition for firearm training. I plan on building an 80% rifle kit which I purchased online from Ceratec, in California. I plan on completing the 80% firearm at my friend Alex's house in Easton. I did not have the intention of committing any mass shootings at all whatsoever."

"He made it clear to the police officers that he thought he was doing everything correct," says Crosland. "He wasn't trying to hide from the police and he gave a full statement for about an hour."

Wagshol is a student who attended classes at Central Connecticut State University and lived in a residence hall last semester.

A spokesperson for Central Connecticut State University released a statement saying, "We have placed Brandon Wagshol on interim suspension pending further investigation. He is also banned from campus at this time."

"If he stays locked up, he's gonna fall behind in school so that was his dad's main concern," says Crosland. "His dad had no concerns that he was gonna hurt a fly."

Crosland says Wagshol intends to get out and hopes to return to CCSU.
Related Stories
Share this story