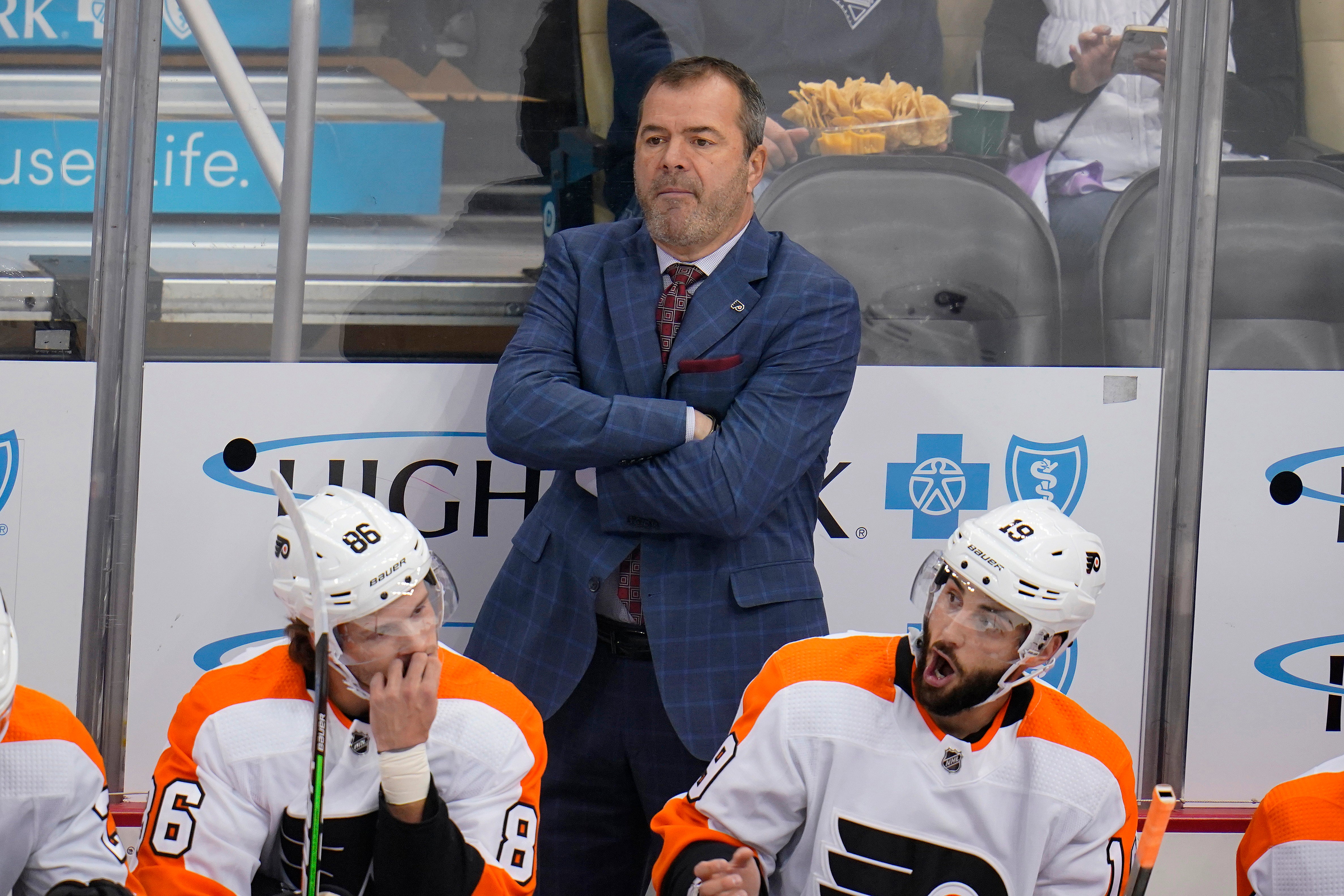 PHILADELPHIA - The Philadelphia Flyers fired coach Alain Vigneault on Monday following eight straight losses, two shy of matching a team record of 10 in a row, and with the franchise far from ending a 47-year Stanley Cup drought.
The Flyers have been one of NHL’s biggest flops of the season. Their latest loss was a 7-1 defeat by Tampa Bay on Sunday night that sealed Vigneault’s fate. Assistant coach Michel Therrien also was fired.
The Flyers are 8-10-4 and in seventh place in the Metropolitan Division. Vigneault went 147-74-54 with the Flyers and missed the playoffs last season.
Mike Yeo was named interim coach. The Flyers are scheduled to play Monday night against Colorado.
General manager Chuck Fletcher tried to blame injuries last week for the team's recent slide, but it became clear as the losses piled up, a change was needed.
“The last ten, we slipped back. There’s no question,” he said last week. “Now the onus is on our group to get it back. When injured players come back, it makes it easier. We can’t kid ourselves. We have to get better.”
Vigneault lasted just 2-plus seasons in Philadelphia and never could lead the Flyers in the right direction this year after a promising first season in which he led them to the No. 1 seed in the Eastern Conference in the NHL’s restart bubble.
“The guy that is the leader of this group who has both his hands on the steering wheel is me and I have to find a way to get this group to play better,” he said Sunday. “We are in a bad skid right now and we need to end this. We have an opportunity tomorrow night and hopefully we will play better.”
Vigneault had led the New York Rangers and Vancouver Canucks to the Stanley Cup Final and was trying to do the same in Philadelphia, where the Flyers haven't won it all since consecutive championships in 1974 and 1975.
The Flyers instead are trying to avoid a 10-game losing streak for the first time since the 2018-19 season.
“I have played a lot of embarrassing games and this is definitely one of them,” captain Claude Giroux said after the Tampa Bay loss. “We need to figure it out pretty quick here."
It's up to Yeo, at least in the short-term, to figure out how to fix the Flyers. Yeo was fired by the St. Louis Blues in November 2018. Yeo joined the Blues as an assistant in 2016 after five seasons with Minnesota. The Wild made the playoffs in three of Yeo’s four full seasons, and he was fired 55 games into 2015-16.
Fletcher was GM in Minnesota when Yeo coached the Wild and the new coach will likely get some games to prove he can steer the Flyers toward a playoff run. Yeo and Fletcher were scheduled to hold a news conference later Monday.
Fletcher overhauled the roster following last season's 25-23-8 record (58 points) under Vigneault. The Flyers gave out rich contract extensions to Joel Farabee and Carter Hart and an eight-year, $62 million deal to Sean Couturier. Fletcher acquired defensemen Ryan Ellis and Rasmus Ristolainen and signed Keith Yandle and Derick Brassard. The Flyers also signed backup goaltender Martin Jones and traded for forward Cam Atkinson.
Again in Philly, the changes weren't enough to make the Flyer a championship contender.
By DAN GELSTON
Related Stories

Islanders game against Kraken postponed due to storm

Women's hockey on the rise in the Hudson Valley

See all
2h ago

Tom Brady's return to the Bucs next season isn't a lock